Foreign citizen working within the community 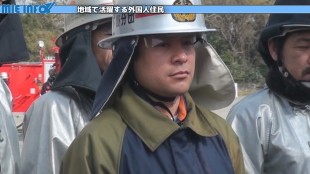 There are many foreign citizens working in the leadership of a community. Today, we will introduce Cesar Nouchi, a volunteer firefighter.

The volunteer fire brigade is present in every cities and works along with rescue teams in the case of fire or other natural disasters caused by flooding or typhoons. In ordinary days, they undergo disaster prevention trainings, give orientation on first aid, in addition to awareness activities on fire prevention. Volunteer firefighters are local public employees performing a special and part time role, in addition to other works and formation. In the case of natural disasters they leave their homes or workplaces to work in order to help the community.

Most volunteer firefighters are residents in the neighborhood, and by the fact they know all about the area they live and are able to arrive in a place before the firefighters or rescue team to carry out the first aid in an emergency case.

In the 2016 New Year Yokkaichi city firefighters event, Mr. Cesar Nouchi, a Peruvian citizen residing in Japan for more than 20 years, received a certificate of appreciation. For over 3 years, he 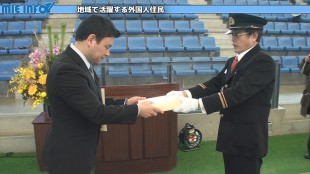 underwent trainings and strived in order to help the community.

The certificate of appreciation was delivered by the volunteer firefighters’ leader from where Cesar takes part.

The leader of this corporation, Mr. Ichikawa, spoke about the activities carried out by the volunteer firefighters.

“Volunteer firefighters must work in the case of fire, as well as activities on natural disaster prevention on the region, preventive trainings and first aid and other related activities”.

What are the requirements to become a volunteer firefighter?

“In each neighborhood there is a limited number of positions, and in the absence of one of them, the citizen can apply with the leader of each neighborhood, or talk directly to me for proceedings. 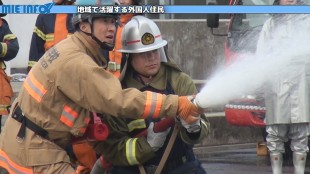 What is the importance of a volunteer firefighter?

” The importance is to carry out trainings on disaster prevention and the first aid course to help local residents”.

Mr. Cesar Nouchi spoke about what were the reasons that led him to become a volunteer firefighter and about the certificate he received during the event. He also spoke about how important is the participation of foreign citizens in the neighborhood activities.

“In Yokkaichi city, we lived in a neighborhood in which there were many elderly people, and as the apartments were owned by prefecture, a few young people lived there. My family and I always met the rules related to garbage,  took part in the daily tasks, cleaning, patrols, in several neighborhood activities. Neighborhood coordinator, known as Kumicho, always observed us, helped us, and one day she came to my house and talked to us and my mother, and told us that they wanted me to take part of the firefighter department, I mean, in order to become a firefighter and help people. They were looking for someone responsible, able to assume this responsibility, since it is not everyone that can do it. So, I decided to take part of it, since we live in the neighborhood, I accepted the proposal.

How was your training?

“Regarding the training, we from the volunteer firefighter department, have some interesting ones, in which we take part every year on competitions with other volunteers from the neighborhood. We carry out trainings 1 month in advance, and we train every day to try to win the prize. The assessment is based on agility, effectiveness and technique, therefore undergoing a self-training and obtaining our agility, effectiveness and above all the coordination of body members.”

Have you took action in any situation? 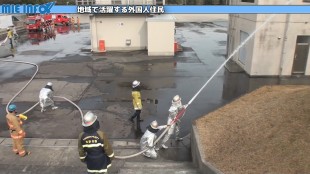 “There were about 5 fires near our house, during a 4- year period and, one day, when we were on the train, a woman fell to the ground and started shaking, it seemed she was having an attack, frothing at the mouth and, due to the training I had on the firefighter department, the only thing I thought was to insert a cloth on her mouth to avoid her to bite her tongue and suffocation. And, thanks to God, as we arrived in the next station, the ambulance was already there. After some days, people were there on the day let me know the woman recovered and were alive.  And, as I always used to take the train in the same hour, in the next day, when I get into the car, many Japanese applauded me, and I’ve never saw that, for me it was a unforgettable experience and I am proud of taking part of this department.”

Today you have been honored, what did you feel?

“I really don’t know how, I have no words to thank. I was given an appreciation signed by the major of Yokkaichi city, it is a honor for me. I am really happy by being able to contribute with a little of me.” 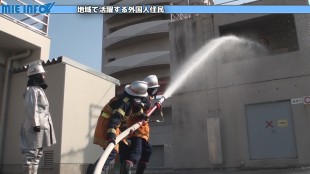 Could you let a message for foreign residents in Japan related to this activity of being a volunteer firefighter?

“Yes, sure. This activity carried out by volunteer firefighters is very interesting, not only for the Japanese community, but also for our families, friends, for everyone next to us, for our children. And it will be very useful when we return to our countries. And my message to all foreigners is that the young people have to enjoy. I also want to let a message that we are no longer the dekassegui community, that came to Japan to save money, go back and make something in our countries. Our community have lived in Japan for many years and I believe this country gave us work, respect, opportunity and now it’s our time to pay them back. I believe we are no longer visitors in this country, we live as Japanese people live and we already take part of this society. Thank you.”