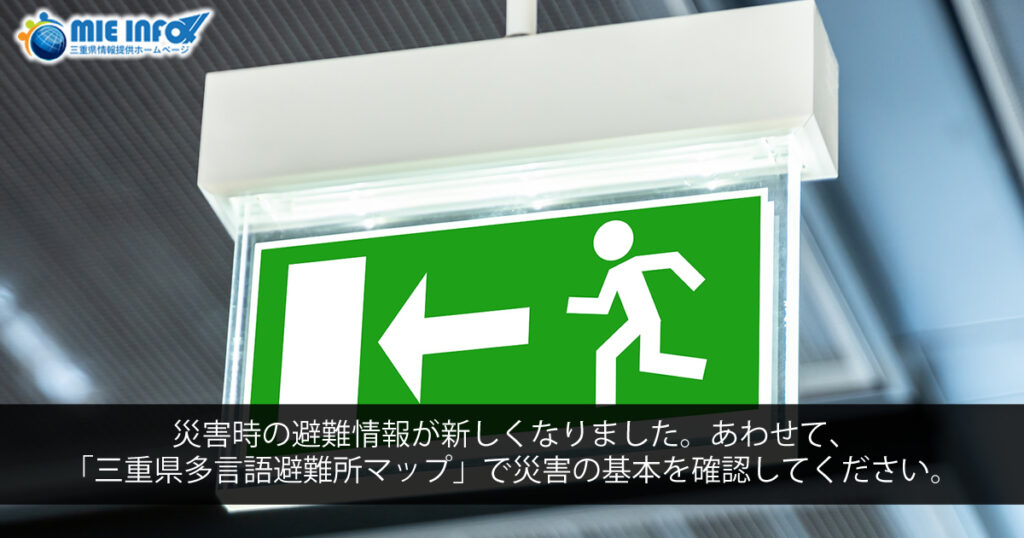 The evacuation information in the event of a disaster has been updated.  At the same time, please check the basic disaster information “Mie Prefecture Multilingual Evacuation Center Map”. (Mie-ken Tagengo Hinan-jo Map – 三重県多言語避難所マップ).

On May 2021, The Disaster Countermeasures Basic Law (Saigai Taisaku Kihon-ho – 災害対策基本法) has been amended to improve evacuation information in the event of a disaster.

The main amendment is that the Evacuation Advisory “Hinan Kankoku” and the Evacuation Order (emergency) “Hinan Shiji” had been unified into one and will just be called “Evacuation Order(Hinan Shiji)”.  Until now, the difference between the evacuation advisories and evacuation orders (emergency) was not fully understood, and that is the reason why many people were affected during disasters due to the delays in evacuating because they did not evacuate at the timing of the evacuation advisories where they should have evacuated.

To all the citizens of Mie

Take steps to protect yourself according to the evacuation information announced by the municipalities.

It is a situation when there is a risk of a disaster occurring and people who need more time to evacuate, such as the elderly and people with disabilities, must flee away from dangerous places and evacuate.

It is a situation where the risk of a disaster occurring is high.  Everyone must flee away from dangerous places and evacuate.

It is a situation where a disaster is imminent or has already occurred and lives are at risk.  Find a safe place immediately.

Government Office: “Evacuate by Following the Evacuation Order. The Evacuation Recommendation has been abolished” (pamphlets are in Japanese only)

Province of Mie: “The Evacuation Information has been updated”
https://www.pref.mie.lg.jp/STAISAKU/HP/000249704.htm

In Mie Prefecture’s Multilingual Evacuatio Site Map, there are informations about disasters and what to do when a disaster occurs.  The location of the evacuation sites can be checked through Google Maps.