Trends of foreign residents in Japan according to Angelo Ishi 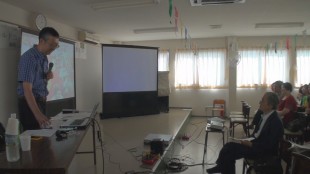 Angelo Ishi is a Professor at Musashi University in Tokyo and, for many years, has studied the behavior of foreign residents in Japan. He is Brazilian and has been in Japan for over 20 years and, when presents himself, uses the term “Zainichi Burajirujin Issei”.

The term “Zainichi Burajirujin Issei ”means”first generation of Brazilian resident in Japan “. According to Professor Angelo, this is a strategy to conveyJapanese people that we Brazilians are also members of Japanese society.

During the lecture, he quoted some interesting information regarding the behavior of Brazilian community resident in Japan. He mentioned the “Nippon Gambarou” movement (“Let’s strive together, Japan”) after the Great Earthquake of Touhoku region.

We conducted an interview with Professor Angelo Ishi, in which he tells us about the concept of foreign residents behavior, and, to finalize, ProfessorAngelo leaves a message to everyone residing in Japan. 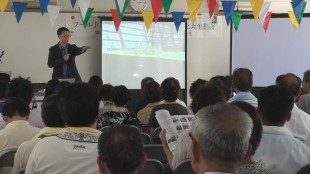 And not only me, but all Brazilians and other foreigners residing in Japan, should present themselves the same way, showing that you are not just a visitor and call onto include you as a member, a partner from the same team Japan. ”

Q. Is the exchange between foreign and Japanese residents being conducted?

“In the current situation, unfortunately, we cannot say there is an exchange, understanding or awareness. This means that many foreigners residing in Japan are still in doubt between returning to their home country or staying here, but beyond that, there are few Japanese who have a decisive vision to include foreigners as people who are willing to struggle with them for Japan, although we are in the 21st century, in 2014, in an era of globalization. And these few Japanese are often at the top of many industries. This is how I analyze. ”

Q . What foreign residents can do to get better integrate and increase this multicultural integration?

“We do not need to get too tied up in this discussion on TABUNKA KYOUSEI, which is the multicultural society, if it is a valid concept or not , or if the word integration is good or not, in other words, we do not need to extend the discussion on anabstract and inaccurate subject. So, we can first, in every opportunity available, we should send a clear message, either to a Japanese friend, or to the leader of the association we belong, I mean, to our boss, send a clear message that there is a possibility of you, of us, end up staying here for life, it does not need to be a certainty, no one needs to be sure of anything in this so complicated world we live, but we have to make clear that there is this alternative, there is this option, the possibility that we end up staying here for life.

Why do we need to clarify this? Because making it clear, the way that this Japanese counterpart is looking at us is going to change. If this counterpart still has doubts, for example – I wanted to offer a better position for such person, but this person is a foreigner, and some day may go back to his/her country– in other words, it is hard to have a 100% of expectation in relation to a foreigner compared to a Japanese citizen, so, this has been an obstacle to the rising of many foreigners here in Japan. So, we have to eliminate in every way this cloud there is in the Japanese side, I mean, we have to clarify it– Look, I’m prepared and there is a chance I stay here for another 50 years, even die here. – Even if it is not your certainty, this can make the person to offer you a deal that before was not about to propose, propose you a promotion that might not happen if the person were in doubt whether you would be a long time here in Japan or not, finally, it may happen in all situations even in loving and sentimental ones, right? A person who was in doubt if should go a bit beyond on a date starts to look at you with other eyes, finally, it happens in all situations. ”

To finish the interview, I would like you to leave a message.

“As a Brazilian resident of the first generation, I would like to ask everyone to include themselves in the same team, in the more than 2 million foreigners like me, who resides here in Japan and have the same knowledge, in order to Japanese society does not see us as a problem, but as a globalized workforce, as a valuable treasure of human resources. I would be very happy if they all see us in a more positive way. “