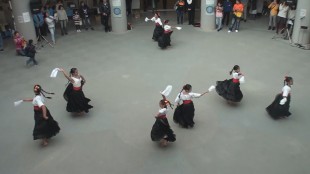 In Japan there are many foreign residents who contribute to society. They work, study and bring a little from their culture to Japan, contributing to the development of a multicultural society.

But what is the meaning of “Tabunka Kyosei” (multicultural integration).

“I believe the most important is the integration there is on daily living. For example, recently, several news form Islamic State are being released, but there are many differences regarding religion, daily life, culture, among others. But, these differences are the best part, since there is a mutual understanding among those who live in the same place, this is something very important to multicultural integration.”

In the event “Tabunka Kyosei Keihatsu” held on February 14 in Ise city, there were a number of seminars and presentations about different cultures existing in Japan. We interviewed some foreigners attending in the event and asked them about their experiences in Japan. 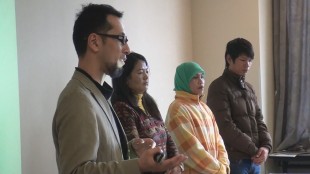 “It was very hard when I arrived in Japan since I was not able to understand Japanese. But I started studying at a school where teachers were lovely and taught me in a nice way, it was very nice because I could learn Japanese.

I had some difficulties but all the Japanese were nice to me and always helped me. I always faced difficulties everywhere I went but it was very nice because everyone helped me.”

If there is another opportunity to come to Japan, would you come?

“Yes, if there is another chance, I would like to come again.”

“My name is Melti and I am from Indonesia. I am a trainee from PHD.”

“Here in Japan life is convenient and everyone is on time. And all the Japanese are nice, and I find it very good.” 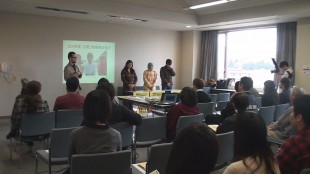 Where are you from?

“My country is Myanmar.”

“I think life here is very difficult. It is convenient but daily life is busy. Everyone speaks in a nice way that’s why I have never experienced problems with people who come to talk to me.”

“I enjoy daily life in japan. The easiness of convenience stores, and I like Japanese food. For example, I think I like sushi the most. I love kaiten zushi. All the times I come to Japan with friends or my family we go to kaiten zushi. In Australia, sushi is on the rise, but undoubtedly, Japan’s sushi is the best.”

How is your communication with Japanese people?

“Undoubtedly, in the beginning I tense up due to comprehension level, mainly because in Japanese there are more polite terms, so it causes a little tension. As Japanese don’t care about it, since they know I am still studying the language, our communication runs smoothly.”

The event also featured a cultural presentation from Peru, with the typical dance “Mariñera Norteña” that attracted all the people through the graciousness of movements. 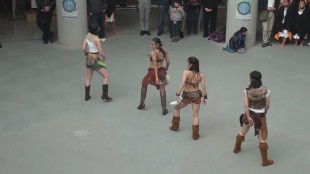 “It is a goal both from me and Peruvian children’s mothers who attend the dance school, in order to them learn typical dances from our country and perform in nice places like this, where many Japanese join together.”

Since you have been living here, how is your daily life?

“I made many friends since I have been living in Japan, the relation I have with them is the best enjoyable thing for me, my daily life is like this.”

“I started practicing this Latin dance after I saw teacher Grace performing. I was impressed with such beauty and I became interested in doing the same.”

Foreign residents in Japan can contribute in many ways to Japanese society. Not only working, but helping to create a society with more understanding on foreign culture. 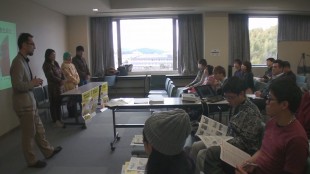 “For example I can mention the city of Kobe, today I came from there. In Kobe, when the great earthquake struck, Japanese people went through hard times, but they had support from foreign residents. Based on this experience and the current situation in Japan, where population is decreasing gradually, it is no longer possible to live or work only with Japanese citizens.

Statistics have been already released for 2015, predict to be the year with the greatest number of foreign residents in Japan’s history. And with the decreasing birth rates, it will be increasingly difficult to keep industrial sector in the country only with Japanese manpower. That’s why, I think that, when more people come to Japan, if they work here, get married here, live and raise children here, this will bring a great learning to Japanese people. And these foreigners will be very important for Japanese economy. Therefore, I would be grateful if everyone thinks like that and try to live together this way.”

Learn it. Feel it. Join it. Show your smile to everyone. This is the true meaning of multicultural integration.