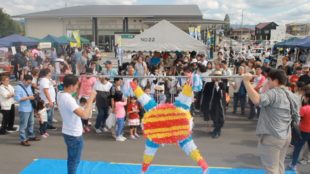 On October 8 the Mie Multicultural Awareness Event took place along with Iga International Exchange 2017. The event was privileged by the good weather and there were many stalls of food from different countries and stalls of various organizations, as well as dance performances and Piñata. Citizens of several nationalities attended the event and had an enjoyable day.

At the beginning of the event, the director of Iga City Department of Human Rights and Daily Life, the director of Exchange Festa Executive Committee, as well as a deputy from the city, welcomed the attendees and mentioned the importance of systems advance related to a multicultural society.

The ratio of foreign citizens in Iga city amounts to roughly 4.8%, twice the national average. There are many foreigners contributing to the local community development. Even though the multicultural exchange is growing in the region, people in charge highlighted the importance of Japanese and foreign citizens help each other to support the region even more. 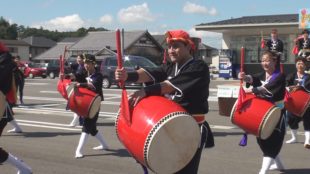 On the stage and surrounding area, several cultural performances took place. At the beginning of the event, the branch of Mie Ryukyukoku Matsuri Daiko made their presentation. Members danced along with attendees and cheered up the event.

One of the members of this group is the Peruvian Pablo Kohatsu.

“My name is Pablo Kohatsu. I am Peruvian. I’ve been living in Japan for almost 5 years. I live in Mie Prefecture, in Iga city. Actually, I like this dance because it is an Okinawan dance. My father’s parents are from Okinawa. I come from a family with this culture. Actually it is a great feeling because it is the fact to have friends in Peru, Brazil, Argentina, Bolivia and USA allowing us to have the same culture, the same way to communicate through the dance.

I find not only Peruvians, but foreigners themselves learn much more about Japan’s culture. I wish those living in Japan learn more the culture of this country. Learn a little more if your surname comes from Okinawa or Japan’s main island. It’s good to know the culture.” 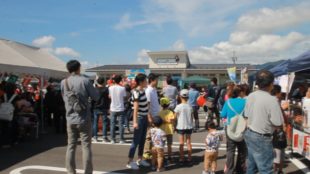 At the event, multicultural exchange stalls have been set up. Attendees had the chance to try out typical food from several countries. One of the stalls offered Philippine food.

“My name is Ikeda Maki. It has been 12 years since I have came to Japan. Today I am present with a stall offering Peruvian and Philippine food. We have pork barbecue and “turon”, a kind of banana harumaki, for Philippine food. We also have doughnuts typical from Peru. These doughnuts are called “picarones”, made with pumpkin and sweet potato. Philippine barbecue is a little sweet and it is similar to “yakitori” from Japan. I find it will delight Japanese taste.” 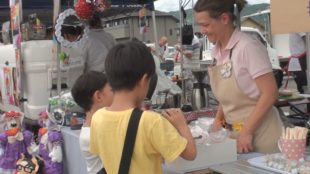 There was also a stall offering traditional coffee and handicraft from Brazil. The person in charge for this stall said she had fun when presenting the culture from her own country.

“My name is Mara and I have been living in Japan for 17 years. I come with (my) family and decided to design some handicrafts here in Iga along with some friends. We design handicrafts, baby shower favors, garlands and some paintwork. However, which I like to do the most is to serve our Brazilian coffee that is a little top from Brazil in our hearts. Japanese people appreciate a lot our coffee.

It is a wonderful experience! Japanese people like very much everything we present: our song, culinary and mainly our coffee. Japanese people always ask us: ‘Is coffee tasty? Is it similar to Japanese coffee?’ and I answer “No, it is different.’ So they taste and say that coffee from Brazil is really tastier than Japanese coffee.” 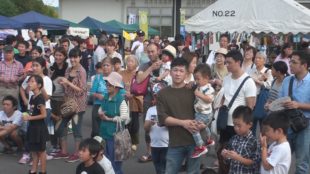 The Chinese Nakahara Ebin has been living in Iga city for 25 years. She talked about the importance to learn other citizens’ culture and the merits in accepting other’s culture.

“Good afternoon. My name is Nakahara Ebin. I have come from Shangai, in China, to Japan more than 20 years ago. On the personal scope, I find life here is a journey. We meet several people in the middle of the journey, we come across several cultures and traditions, and it becomes the landscape of this journey called life that will increasingly becoming richer. Also, on the personal scope, the flow of different cultures is similar to a new blood transfusion. Within this society, we promote the social development by learning, accepting, exchanging and polishing each other. Thus our daily life becomes something colorful.” 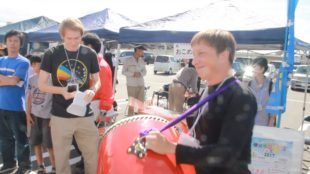 The American Timothy Spicuzza attended the event. He emphasized the merits on multicultural exchange and shared the experiences he absorbed at this event.

“My name is Timothy Spicuzza and I came to Japan about 10 years ago. I’ve lived here for 7 years two of those I was back home. Learning about different cultures is a very very important thing. It’s very important for countries to interact with each other to know about each other’s cultures. Understanding each other is the most important thing in the world for being able to have a peaceful world. It was great, absolutely. I love Okinawan culture and I love all these dances. It’s been fantastic. It’s been a really fun way to get to know about other cultures in a fun environment and have some really good food.  I liked here a lot.” 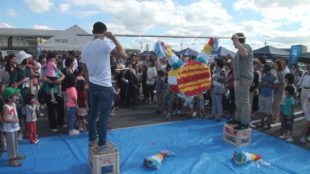 There has also been a presentation of Piñata, a tradition in South America. Giancarlo Uehara, Peruvian and staff member at Mie International Exchange Foundation, talked a little about this culture.

“Since many foreigners live in Mie prefecture and in Iga city, I find the (multicultural) interaction can be built from the point we know Japanese culture and share our cultures with each other. I find this kind of multicultural festa is very important.

The Piñata is performed at events like birthday parties in South America countries. Originally, its roots are from Mexico and the main thing is to hit a doll filled with candies in birthday parties. The Piñata is placed and the children, blinkered, break it using a piece of wood and share the candies and toys that were inside it. It is a kind of game for birthdays.

Today we are present with a stall offering typical clothes from Peru. Today I am wearing the chalán outfit. This is an outfit from Peru’s coastal regions. It is also possible to play musical instruments in this stall. This is a zampoña.” 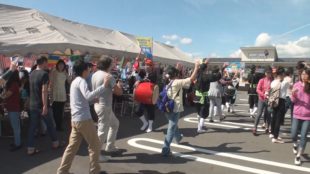 During the event attendees could experience several cultures and traditions all day long.

“Currently there are 4.700 foreigners from 45 countries living in Iga city. It is a significant number, but they are not yet living together with Japanese people. Based on this fact, by carrying out this kind of event, I find it is an opportunity to get to know both foreign culture and the food being offered at the stalls as well as enhance the exchange.

There are some points that are difficult to be conveyed only by words. Specifically, I find the opportunities to learn each other’s culture through exchange events like this are important.” 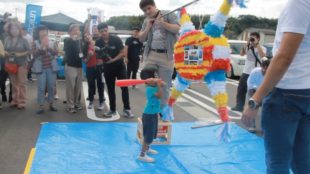 There are many features within culture and traditions that are difficult to understand based only in information obtained through videos and texts. See, touch and experience other cultures is crucial to deeply understand them. Join multicultural exchange events that will take place within the region. There is no doubt it will be an opportunity to have new discoveries and a pleasant day.