There were many attractions for those who attended the event in commemoration of the Citizen’s Day. In “food tasting” area , there were several dishes so that visitors could try out. Several booths offered activities and games for children who had a great fun during the day .

The Governor of Mie, Mr.Suzuki, told us about this commemorative event.

“Mie Prefecture was founded 138 years ago , on April 18, 1876 , and to commemorate this date every year at this time we held the ” Citizen’s Day . ” Today, there are 64 different booths including food , and in addition to the good weather, the day is enjoyable with the presence of many visitors to the region.

Today we opened the museum MieMu . It was a successful event with a queuing of over 1 hour. We want to make this museum a place where visitors from abroad, children, among many other come to visit it.”

On the same day to commemorate the Citizen’s Day , the Mie Prefecture General Museum was opened, the MieMu . A ceremony was held early in the morning to mark the official opening . The museum has a modern building, where the history , characteristics , culture and traditions of Mie Prefecture are shown through the exhibitions.

Mr. Ukawa from MieMu explained to us about the main exhibition halls of the museum , starting with the Mie – zou , a fully restored skeleton of a prehistoric elephant that is on display in the main hall of the museum . 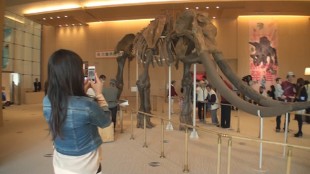 “This prehistoric elephant is called Stegodon miensis , which is named Mie in its scientific name . It is the largest land mammal , with 7.6 m long and 4 m high to the shoulder blade . This exposed skeleton is from a specimen in adulthood .

This is the basic room, which shows the Mie identity . At first , in this room, visitors will get to know in many ways over the region of Mie . There are several photos of landscapes and objects that represent Mie Prefecture . Through the explanation of these items displayed, you can learn more about this prefecture. 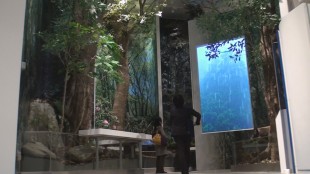 In this space we create an atmosphere like we have assembled the prefecture here inside. Around the entire room there is the nature of Mie represented here. In the central part, within that nature, it is presented the history and culture of Mie’s growth.

This planned exhibition theme is “the beginning of MieMu”. This content is from the interesting selection of samples of materials that will show Mie prefecture to the visitors through exhibitions. Several curators are responsible for various areas and they will plan all content that  is certainly worth seeing. “

In order to ease the visit of foreign nationals, the Museum offers pamphlets in 5 languages inside the pavilions​​. You can also borrow a device so you can hear and read several explanatory of the items on display in these 5 languages​​. 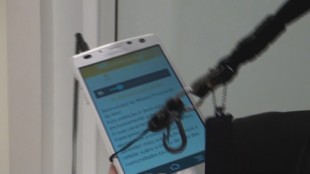 “This is the terminal search device. This device is enabled for 5 languages ​​(English, Chinese, Korean, Spanish and Portuguese). It is intended especially for foreign visitors who have difficulty understanding the content displayed in Japanese. With this device, you can listen to or read the explanations in 5 languages ​​.

This site is adapted to overlap this search device, doing so,  the content will come in the form of text and audio , providing comprehension of the objects on display .

These pamphlets are also available in 5 languages, which is delivered to visitors who have difficulty understanding the Japanese language and the content is easy to understand .

We would like many visitors from foreign nationality come here so they can learn even more about Mie.”