Today, we are here at the Mie Prefectural Government Office to interview the Governor of Mie, Mr. Suzuki Eikei. In August 2013, the governor visited Brazil and one of the issues discussed was the easing of visa requirements for Brazilian citizens. We would like to get the governor’s views on the topic and hear what he has to say to Mie’s Brazilian and non-Japanese residents. 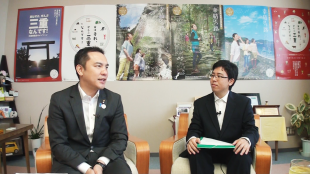 Satsukawa Leo: This is Leo from the Mie Prefectural Government’s Multicultural Affairs Division. Governor Suzuki, thank you for agreeing to speak with us today.

Satsukawa Leo: Getting right to the point, what can you tell us about the announcement put out by the Ministry of Foreign Affairs regarding the easing of visa requirements for Brazilian citizens?

Suzuki Eikei: When the Prime Minister of Japan Mr. Abe went to Brazil and spoke with President Roussef, he announced plans to ease visa requirements for Brazilian citizens traveling to Japan in a joint statement. Until now, Brazilians needed to request a tourist visa before each visit to Japan, now, with the new multiple entry visa for Brazilian citizens, they will be able to visit Japan as many times as they like for a period of 1 or 3 years. 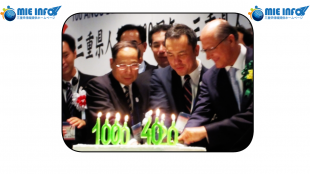 The initiative to enact this policy started when I was in Brazil in São Paulo last year celebrating the 40th anniversary of sister region relations between Mie Prefecture and the state of São Paulo.

While I was there, I spoke with members of the Association of Mie Citizens, as well as with Brazilians of Japanese descent, who asked me to support the easing of visa requirements for Brazilian citizens so they could more easily interact with their homeland. When I returned to Japan, I promptly spoke with Minister of Foreign Affairs Fumio Kishida; Minister of Justice Sadakazu Tanigaki, who is in charge of visa sector; Chairman of the National Public Safety Commission Keiji Furuya, who works closely with the police; and Senior Vice Minister Taro Aso, who serves as the current Chairman of the Japan- Brazil Parliamentary League. Tsu City Mayor Yasuyuki Maeba joined me in my proposal, and we had support from representatives of Kumano, Yokkaichi, Suzuka and other cities in Mie with strong ties with Brazil.

With everyone’s help, I am pleased to say that we were able to enact this policy within just one year. I am sure that this will have a positive influence on future exchange between Brazil and Japan.

Satsukawa Leo: I see. I certainly hope that the number of Brazilian visitors to Japan will increase as a result of this policy change.

Suzuki Eikei: Definitely. This easing of visa requirements will be very influential in that regard. 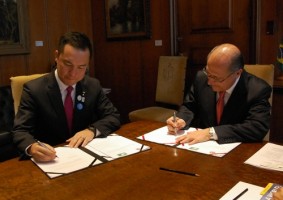 atsukawa Leo: What changes do you envision will occur as a result of this policy change?

Suzuki Eikei: When I was in Brazil to celebrate 40 years of sister region relations between Mie Prefecture and the state of São Paulo, I signed an agreement alongside São Paulo Governor Alckmin to deepen exchange in the fields of environmental work, education, tourism, trade and industry. I believe that this new policy will positively affect all five of these areas, but I think the largest impact will be in tourism due to the increased number of Brazilian visitors to Japan. In fact, Brazil is the country that has shown the largest increase in visitors to Japan, second only to Thailand. The increase in visitors from Brazil to Japan was already high before this policy, and this visitor-friendly visa policy will probably result in a sharp increase of visitors. .

Satsukawa Leo: That sounds wonderful. Are there any places you would recommend for visitors to Japan?

Suzuki Eikei: In Mie Prefecture there are many sightseeing attractions, but if I had to mention three in particular, one of them would be Ise Jingū, a Shinto shrine complex with 2000 years of history. The Shikinen Sengū, a ceremony where the shrine buildings are faithfully reconstructed in an adjacent lot, has taken place every 20 years at Ise Jingu for 1300 years. I recommend a visit there to anyone looking to experience the Japanese tradition.

The second attraction is the one we promoted when we went to São Paulo: the ninja in Iga. Since Mie Prefecture is the birthplace of Iga Ninja Clan, visitors can borrow ninja costumes, and try their hand at ninja training, like shuriken (ninja star) throwing.

And the third one is where the hero of the racing world from Brazil, Ayrton Senna, raced the F1 Grand Prix: Suzuka Circuit.

There are other several tourist destinations, but these three are the ones I most recommend.

Satsukawa Leo: I see. By the way, if Brazilians or other non-Japanese need information about tourism, where can they find it? 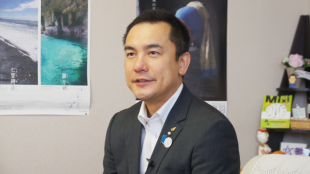 Satsukawa Leo:  It would be great if Brazilians could explore all the wonderful things Mie Prefecture has to offer, wouldn’t it?

Suzuki Eikei: Yes, we hope that many Brazilians and others come to explore all there is to experience in Mie Prefecture and that they return to their home country with lots of good things to say about Mie.

Satsukawa Leo: To conclude, do you have any final words for Brazilians and other non-Japanese residents in Mie Prefecture?

Suzuki Eikei: Our successful bid to ease visa requirements for Brazilian citizens was thanks in large part to cooperation from citizens and residents of Mie. Along with Brazilians and other non-Japanese residents in Mie Prefecture, we are building a society where Japanese and non-Japanese can live side by side. This is thanks to the tireless efforts of Brazilian and other non-Japanese residents in their communities. Their presence and work in the community has fostered favorable attitudes towards Brazil and other countries, and encouraged the Japanese community to deepen relations. This in turn led to the policy change we talked about today.

Many Brazilians and other non-Japanese residents may experience difficulties related to medical care, education, natural disasters and day-to-day living. If you do, I hope that you will approach the citizens of Mie for help, since we are glad that you are here and look forward to living and working with you in our communities for a long time. We hope that you will have only good things to say about Mie when you talk to friends and family back home!

Satsukawa Leo: Thank you very much for your time today.

Suzuki Eikei: Thank you for having me.