The meaning of advisory and warnings for tsunamis and earthquakes 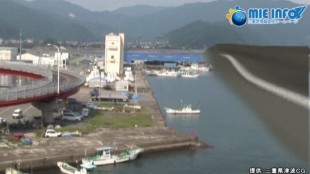 In the Japanese archipelago and its surroundings, the continental plate (Eurasian Plate) and the oceanic plate (Pacific Plate and Philippine Sea Plate) are moving towards each other, following the movement of the earth’s mantle. The plates press against each other forcing rock underground. After many years of this pressure the crushed rock creates gaps along the plates, causing the plates to slip violently. The violent action of the plates slipping causes an earthquake.

When an earthquake occurs under the ocean, there is a possibility of a tsunami. Even a tsunami with a height of some centimeters can cause loss of life. If you feel an earthquake when you are in a low-lying area or close to the sea or see or hear a tsunami advisory or warning, it is vital that you evacuate to higher ground.

Information Released from the Media

When an earthquake strikes, there will be information released via television, the radio and internet. Most information will only be available in Japanese, but it is important that you can understand the information and take the right course of action. 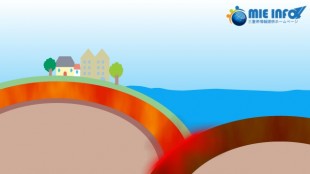 The Japan Meteorological Agency (JMA) will issue Tsunami Advisories, Tsunami Warning and/or Major Tsunami Warning around three minutes after an earthquake occurs if a tsunami is expected to strike. Tsunami information bulletins with information on estimated tsunami heights and arrival  times are issued as the information becomes available. 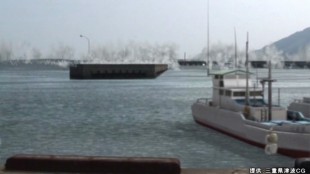 – When a tsunami is forecast with a height of 20cm to 1m and expected to cause damage a Tsunami Advisory is issued.

– When the tsunami has a projected height of over 3m a Major Tsunami Warning is issued.

When a wave of just 30cm reaches you, you can no longer move the way you want or evacuate effectively, and in the case of a wave with a height of one meter or more, most people will be caught in the tsunami current and unable to escape. After a tsunami has formed, and the information regarding the tsunami has been announced, you must evacuate as quickly as possible to higher ground.

When a large earthquake with a magnitude of 8 or more occurs, the initial tsunami warning will include the tsunami height as  “Kyodai”(HUGE) or “Takai” (HIGH) to communicate the seriousness of the threat. If a Major Tsunami Warning is issued with the term  “Kyodai”, evacuate immediately to higher ground because the tsunami will be as large as the tsunami of 2011’s Great East Japan Earthquake. 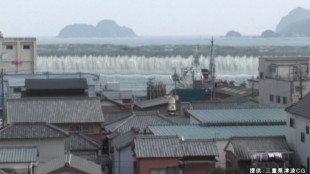 – “Kinkyuu Jishin Sokuhou” – When an earthquake with a intensity of “Shido Go-jyaku” (Five Weak) or above strikes, an early warning is sent out to the surrounding areas with details of when the earthquake will strike and the magnitude. Where strong tremors will be felt, information will be issued from JMA via television, radio and cell phone. If you receive an Earthquake Early Warning take immediate measures to protect yourself.

– “Shingen”  – The epicentre of the tremor

– “Shindo”  : The scale of measuring the strength of an earthquake’s tremors. The scale goes
from 0-7, with larger numbers expressing stronger tremors

– “Yoshin”  – Aftershock :  The tremors which occur periodically after a major earthquake

– “Hinan” – Evacuation:  Escaping to a safe location during a disaster

– “Hinanshiji” – Evacuation order : When a disaster occurs and is expected to cause significant
damage, an evacuation order is issued to advise citizens to evacuate to a safe location

– “Kaibatsu” – Sea level : measure of height used to refer to the surface of the ocean, given at 0m 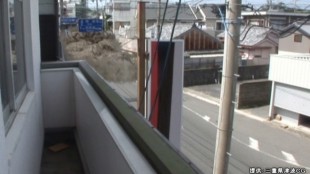 When an earthquake or tsunami occurs it is important for you to stay calm and to receive accurate information. If you cannot understand Japanese well, observe the actions of the Japanese people around you and copy them.

– Information about earthquake in English: http://www.jma.go.jp/en/quake/

– Information about  tsunami in English: http://www.jma.go.jp/en/tsunami/