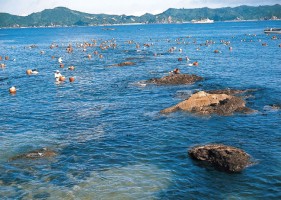 Fish-catching by women divers, called ama, is an ancient Japanese fishing method. The women divers compete to find abalones. People pray for bumper catches and safety in the sea, and dedicate the first abalone of the competition to the gods.

■ 15-minute walk from Sugashima Port after an 18-minute ride on a ship from Sadahama Port, which is located in front of Toba Station on the JR or Kintetsu lines

This brisk festival is a ritual of the Yashiro Shrine held at Kami Island at dawn on New Year’s Day. All men on the island use bamboo poles to hold up a large ring two meters wide which represents the sun, and then they drop it.

■   50-minute ride on a ship from Sadahama Port, which is in front of Toba Station on the JR or Kintetsu lines

These festivals are held twice a year in spring and autumn to express thanks to the gods and pray for the peace of citizens. Jingu-Kagura, a Shinto dance, is performed for the public on a special stage in the Naiku of Ise Jingu.

Expressing gratitude to the sea, mainly for Ise-ebi lobsters, and with hopes for a bumper harvest, people hold a huge imitation Ise-ebi lobster 6.5 meters long and parade along the coast.

Fifty groups of pyrotechnic experts from all over Japan are dedicated in their efforts to launch approximately 9,000 magnificent fireworks, creating a great symphony of fire, sound, and light as they compete in the night sky over the clear waters of the pristine Miya River.

This amazing festival is based on “Dandarabocchi,” a character in a folktale, and has been designated as an intangible cultural asset of Mie Prefecture.

A 112-year-old festival, in which a miniature shrine, traditional dancing, and floats decorated with lanterns parade through Ise City and highlight the Ise Road in autumn.