Displays and workshops provided information about the diverse ethnic groups in Japanese society at the Multiculturalism Event held at Kameyama Nishi Elementary School.

The following workshops were conducted during the morning of the event: 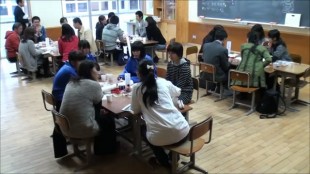 ・Displays and discussion with JICA volunteers

The workshops covered a variety of topics, and was an excellent opportunity for Japanese people to learn more about cultural practices and differences, the activities of various groups and individuals, and non-Japanese living in Japan.

Display booths lined the school’s gymnasium and gave participants a chance to buy products and play games from various countries while providing information on an array of topics. One of the booths also sold Kameyama Miso Yakiudon (thick flour noodles dressed in a miso sauce prepared on a flat grill).

In the afternoon, a dance group from Tsu performed two Bolivian dances, “Capolares” and “Molenada”. 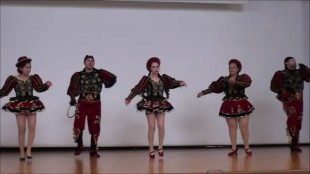 A representative from the Japan Bolivia Association told us a bit more about the dance performances.

[Interview with Rosario Yamada, representative from the Japan Bolivia Association]

[This dance is often performed during Carnival in Oruro and is a part of Bolivian culture. I think it is very important to deepen cross cultural interactions in order foster more communication between Japanese and non-Japanese.」

This is an annual event in Mie Prefecture that aims to provide an opportunity for participants to encounter cultures from around the world. The ultimate goal of this event is the encourage Japanese people to accept non-Japanese as a part of Japanese society.]

[Mie Prefecture is home to more than 40,000 non-Japanese residents. Mie also has the third largest ratio of non-Japanese residents out of all 47 prefectures in the nation. Residents from South American countries, like Brazil, make up the largest percentage of Mie’s non-Japanese population, and we want familiarize participants with these cultures through this event. This event has been held at different locations for the last 7 years, with this year’s venue located in Kameyama City.

Could you tell us a bit more about what you mean by “multiculturalism”?

It means creating a society where people of different nationalities and ethnicities recognize cultural differences, respect one another and live amongst each other in harmony. To achieve this, we encourage Japanese citizens to experience other cultures and teach non-Japanese about Japan.]

This event took place alongside the “Human Festa in Kameyama.” We caught up with the organizer of the Human Festa to learn more about the event’s objectives. 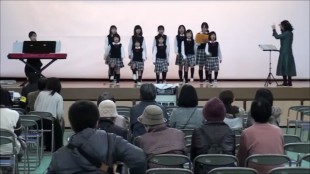 [The morning events focused on raising awareness of the large non-Japanese community in Kameyama and encouraging intercultural understanding and exchange. In the afternoon, the focus is on human rights, and participants are encouraged to think about this topic as they visit the booths that we setup at this event each year.]

“Multiculturalism” has become a buzzword in Japan lately. What does it mean?

[Interview with Mr. Tanaka regarding multiculturalism]

[Because Japan is an island nation, citizens have few opportunities to interact with other cultures, and number of people who go abroad is still rather low. This means that even if many non-Japanese come to Kameyama, there may be little interest in other cultures among Japanese citizens. This is why we have these events; they provide a place for people to interact and understand one another. If a participant watches today’s dance performances and thinks, “wow, I never knew that that kind of clothing and culture existed,” that changes perceptions in society. If societal perceptions change, intercultural conflicts begin to decrease. This is why we hold these events.]

The last event of the day was a lecture by Mr. Taro Tamura on the rights of non-Japanese residents.

Don’t worry if you didn’t get a chance to attend this year’s multicultural event; the event will be taking place in a different town or city in Mie next year. Don’t miss it!