‘Learning from the Great Earthquake: Multicultural Community Building’ was the theme of a symposium held in Iga City on Sunday, July 1st 2012. 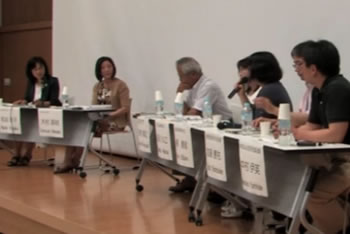 The event was begun by Ms. Omura Masae, the Miyagi Prefecture International Association Planning Division Chief, who spoke about the Great East Japan Earthquake and how the help of volunteers from the region’s Japanese language classes and key members of the foreign resident community was invaluable during searches and in evacuation shelters post-3.11. Omura’s lecture offered an important insight to all in attendance at the symposium.

The NPO group Iga Tsutamaru andMiePrefectureorganized the event in order to foster conversations on themes relating to foreign residents and to increase exchange of information.

“I feel like there are a lot of disaster preparation initiatives underway in today’s multicultural society. However, I’d like everyone to look once again at what is truly important when a disaster occurs – that’s why we organized this symposium. We have reconfirmed that it is what is done at a neighborhood level, with those in your immediate surroundings, which is important. It is key that everyone works together. Organizing this event we felt what was important is not everyone working individually but working together, in one space, in one place.”

The second half of the symposium was a discussion. The panel included members from throughoutMiePrefecturewho had links with the foreign resident community. They discussed problems which occur during a disaster and their possible solutions.

The Ota-cho Neighborhood Council Chairman, Mr. Tamura Teruyuki, spoke to us about participating in a local neighborhood council:

“Ota-cho has many foreign residents living in it and they make up about 10% of the local population. The neighborhood association would love to work together with them to make living in Ota-cho more enjoyable for everyone. Please do get involved.”

We spoke to Mr. Kato, the Deputy Director of the Mie Prefectural Government Multicultural Affairs Division about the importance of living in a close community.

“We’d like the foreign residents to help revitalize the region and be active as regional citizens, it would be great for them to be involved in the area. I would like Japanese and foreign residents alike to make where they live better and that all begins with starting conversations with people in your neighborhood, making personal connections and then expanding your social group from there. I would like all of us to show our strength and become supporters of the local community.”

Yan Eibin, a local resident of Chinese origin is working as an interpreter at Iga City Hall. She spoke to us about living inJapanas a foreign resident.

“I am non-Japanese, of course. But since coming toJapan, I think it is strange that no matter how much time passes one will continue to think, “I am foreign.” We are not visitors, we are citizens of this region and I think that taking positive steps to get involved by studying Japanese and getting to know the area is a good thing to do.”

Sakata Harue, who also works as an interpreter at IgaCity Hall, also gave advice saying that once you move to Japan you must learn Japanese. If you can speak Japanese then even in difficult circumstances you will be able to communicate smoothly.

“We have no idea about how hard life is in an evacuation shelter, about food shortages or how to get supplies because we have never experienced an earthquake. My advice would be to first learn Japanese and then participate at practice drills held around the region and at various organizations. Doing this you’ll learn what actions and planning are needed to deal with a situation as it arises. I personally feel that we all need to positively get involved.”

Nakamura Yoshihide   spoke about the organizations who operate during a disaster during the panel discussion. Foreign residents can also join these organizations.

“I think volunteering is very important. Things go well when we think about where problems might occur, what human resources we have to deal with them and make decisions and coordinate in response to these questions. It makes no difference if you are Japanese or non-Japanese, male or female, we will use you where you are needed.”

Ms. Wada Kyoko has a lot of experience with working with foreign residents in various contexts and she also hopes that foreign residents will get to know the region and be able to work together with Japanese citizens in times of disaster.

“Of course, foreign residents do need support on the one hand, but when they contributing their help they give it everything they have and really do have want to help; they are young and have strength to offer.

Because they don’t understand the language capabilities, Japanese people often do have to support them during a disaster but I think we must increasingly borrow the strength of the foreign resident community. I want them to get involved and felt today that they surely would help if asked.”

Lastly, Ms. Omura Masae spoke to us about the difficulty of communicating with foreign residents during the disaster of March 2011. He traveled fromMiyagiPrefectureto join the symposium and share his experiences.

“After the earthquake we received messages from people all over the world. We also received messages from foreign residents living in the disaster zone and the most common lesson that had been learned was, “I need to learn at least basic Japanese because when disaster strikes it is me and no one else who is responsible for my safety.” They also felt that even when there is no disaster, as a member of the regional community there was a need for them to make more effort to communicate with the Japanese residents around them. When the Hanshin Earthquake struck a large percentage of those who were saved were not saved by ambulances or rescue crews but by the members of their local neighborhood. This is why I think that even when there is no disaster we should take care of the ties which bind our community together.

A lot of new emergency equipment has gone on sale since the earthquake on March 11 last year. And I think that everyone needs to take responsibility to prepare their home for a disaster.

I also think that if an earthquake does strike and foreign residents need to evacuate to a shelter, they should not become ‘guests’ of the shelter, but actively search for something that they can contribute and work together with Japanese residents to overcome adversity.”