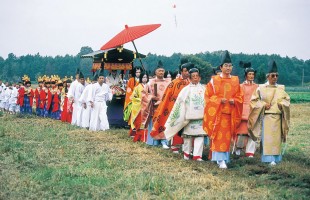 The unwed princess Saioh paraded from Kyoto to Saiku with hundreds of attendants in past days of glory. This festival reenacts that brilliant parade.

■  A short walk from Saiku Station on the Kintetsu Line

This event is held for seven days and seven nights. Many street vendors line up before the gates of Senshu-ji Temple, and approximately 100,000 people visit every year.

■   Near Ishinden Station on the JR Line

Praying for good luck and traffic safety, many events are held such as a children’s parade and handing out rice cakes, with long lines of street vendors.

■   Ride to Oishi bus stop from Matsusaka Station on the JR or Kintetsu lines, change to the Sonmin bus, and get off at the Niu Taishi-mae bus stop

People associated with the Kitabatake family gather from Mie and other prefectures, and hold diversified events during the festival.

This dynamic festival has been held since the middle of the Edo Era. Floats are drawn through the town and a fireworks festival is held around Oyodo Port in the evening.

■   10-minute walk after a 15-minute ride to the Oyodo bus stop, from Akeno Station on the Kintetsu Line

This is the largest festival of Tsu City held in October. The event includes a spectacular parade of traditional performances such as Toujin dancing (originally from Korea), Shago-uma (people dressed in Samurai costumes and masks who appear to be riding on horse replicas), an historic pageant of one of the area’s past lords, Takatora Todo, and Anotsu Yosakoi, the Citizen’s Dance.

■ 15-minute walk from Tsu-shinmachi Station on the Kintetsu Line

In honor of Ujisato Gamo, the founder of Matsusaka castle and pioneer of the business city Matsusaka, this festival showcases a samurai parade and local music and dance, attracting many tourists.

■ Near Matsusaka Station on the JR or Kintetsu lines

It is the biggest Buddhism festival in Mie prefecture, which lasts for 3 days, from the first day of the horse (“Hatsu-Uma”) in March according to the old calendar. The festival is thought to bring the Spring and many visitors come to pray and to ward off evil. The Okaderasan Keishoji temple is the oldest temple for protection against evil.

■  Near Matsusaka Station on the JR or Kintetsu lines