The Prefectural Government will be stepping up seizure of assets from delinquent tax payers during the months of December and January.

～Not paying taxes when you have the means to do so is unacceptable! During this period, the government will be stepping up seizure of assets from individuals who have unfulfilled tax obligations～

Failing to pay prefectural taxes puts financial pressure on the prefectural government, and keeps the government from providing social services. It also places an unfair burden on those who pay their taxes on time.

Therefore, the government will use all legally available options to collect the full amount in taxes owed by individuals who are capable of, but refuse to pay, prefectural taxes. As a way of ensuring that all prefectural taxes are collected, the 8 Prefectural Tax Offices in Mie will be stepping up seizure of assets from delinquent tax payers as outlined below.

Repossession notices will be sent via post to delinquent taxpayers to encourage them to pay their taxes voluntarily. If the taxpayer ignores these warnings, the Mie Prefectural Government will seize assets equal to the amount that the individual owes in prefectural back taxes. Assets liable to be seized include savings, salary, accounts receivable, life insurance benefits, motor vehicles and real estate.

※If the decision is made to seize an individual’s motor vehicle, a tire lock may be affixed to the vehicle to prevent operation.

※Motor vehicles and real estate seized in this way will be sold at public auction via the internet. The funds acquired through these sales will be used to pay the back taxes owed by the original owner of the properties sold.

Failure to pay any taxes directly collected by the Prefectural Government may result in seizure of assets. However, the focus of this initiative will be individuals who owe large amounts of motor vehicle taxes. 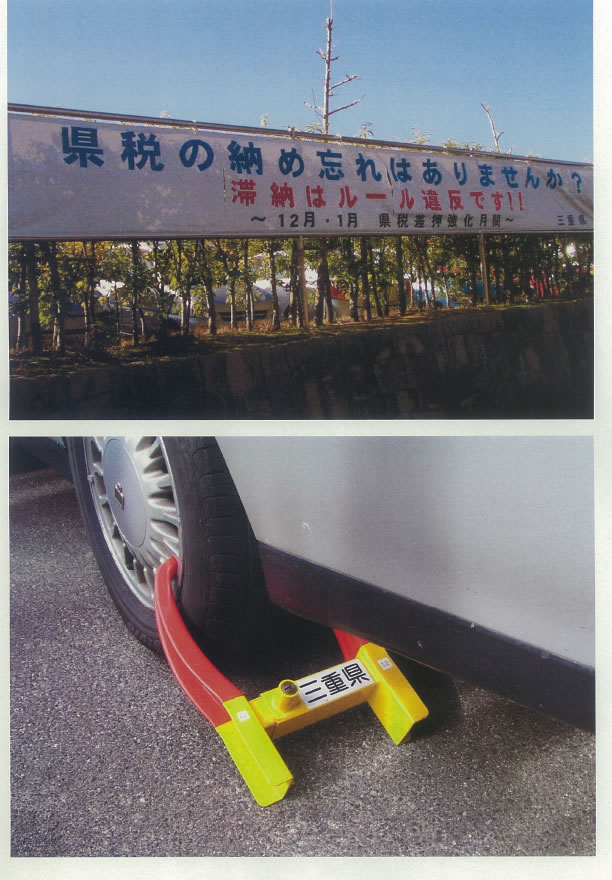